“God, put your hands over our hands as we get to work. And thankfully, we saved his life." Corporal Eddie Puente, East Central Police Department

In contemporary times, unity seems to be at a premium. On one summer night in 2017, the compelling nature of unity saved a young child’s life in a harrowing story of heroism, trust and faith.

June 2017: Corporal Roy Mora of the East Central Police Department saw a vehicle traveling at a high-speed eastbound on New Sulphur Springs Road. The frantic pace and being in the wrong lane was enough for Mora to make a stop.

“It was reckless driving and I thought, ‘I’m impounding this truck,’” Mora said.

The driver, a young man named Michael, told Mora that his great-grandmother had called him and his nephew had drowned. Calm and cooperative, he implored Office Mora to let him answer his family’s emergency.

Trust; it came down to trust. Mora said he believed him, even though he quipped “I get lied to a lot,” and would follow Michael to the residence which was located near East Central ISD.

When reaching the residence, the officers and young man raced to the back of the property where they came upon a toddler on the ground, unconscious and unresponsive.

“I don’t swim and I’m 4’11” jumping into 5’ of water,” said Jacqueline Clark, great-grandmother to Majesty. Majesty fell into the pool, the worst-case scenario for many families with a pool on their property.

Jacqueline, a retired nurse, had just had surgery as well. She went into the water to pull out Majesty, three-years-old at the time.

“I got him to the top of the steps and was praying to God while talking to Majesty and performing CPR,” Clark said. “I said, ‘God, this one you cannot have. I need him all the way back.’ I kept saying to Majesty, ‘come back to Gigi.’”

Clark contacted family and 911. This is where family, police, and faith all came together.

Officers Puente and Mora began alternating chest compressions on Majesty. The shallow breathing only improving here and there whenever water came out of his lungs.

“I would estimate that we did 300-400 compressions by the time EMS arrived,” Puente said.

Only to lose him again.

Officer Puente can definitely be considered an expert in CPR. A lifeguard for the YMCA for 30 years, he has a long history of teaching the paramount life-saving techniques.

There was one thing he has never experienced though.

Knowing that the bones of a toddler are still brittle and in development, Puente knew that he had to keep that in consideration.

“That’s when the training kicked in,” Puente said.

Considering that Majesty’s great-grandmother had started doing CPR before the officers arrived, Puente knew that oxygen had been administered and the clock had been restarted. Considering the amount of time between the initial stop, the conversation, and the drive to the residence, Clark is equally as critical as the trained officers in keeping Majesty alive.

For the third time, the officers began compressions on Majesty.

Shallow breaths had improved, but not to a point that instilled full confidence in the experienced officers. Soon, EMS had arrived and Majesty was flown in a helicopter to the hospital.

“We didn’t expect him to survive or make a complete recovery,” Mora said.

The officers had done their duty as first-responders; as they watched the helicopter fly away, they had prayers but not total optimism.

Two days later, Mora went to the hospital to visit Majesty and his family. He brought his child with him along with a stuffed animal and a football (as Majesty’s father, Chris, was a former Hornet football star).

Expecting the worse, Mora met with Majesty's mother who told him the news… with a great, big hug.

“The nurses love him!” she told Mora.

Mora’s surprise continued with the fact that doctors said that Majesty would make a 100% full recovery.

To an outsider looking in, the East Central Police Department are woven into the fabric of the community. A rare trust exists between citizens and officers.

“We’ve grown with the community,” Mora said. “We’ve gained their trust and respect.”

Puente notes that there is a brotherhood amongst the ECPD. Considering that Mora has 20 years of experience with East Central and Puente with 14, it is safe to say that the officers are committed to the well-being of the community.

“We wear a lot of hats,” Puente said. We’re mental health officers and trained and certified across multiple disciplines.”

The officers note that the ECPD police chief has made it a point for all officers to be CPR certified and first-aid trained annually.

“I give the world to the officers,” Clark said. “They stayed by his side. I wasn’t tired, but they knew what to do. They jumped right in and took over.”

Both the officers and Clark have seen each other a few times since then. Friendly hugs and handshakes are exchanged.

“They know our family really well, and they’ve grown up around them,” Clark said. “I thank them from the bottom of my heart. Majesty is the highlight of my life.”

Now in kindergarten at Oak Crest, Majesty is a bright, energetic child that already loves the sport of football.

“It was a miracle because clinically, he was gone when he was in the water,” Clark said. “Majesty tells me, ‘Gigi, I went to Heaven and God brought me back.’” 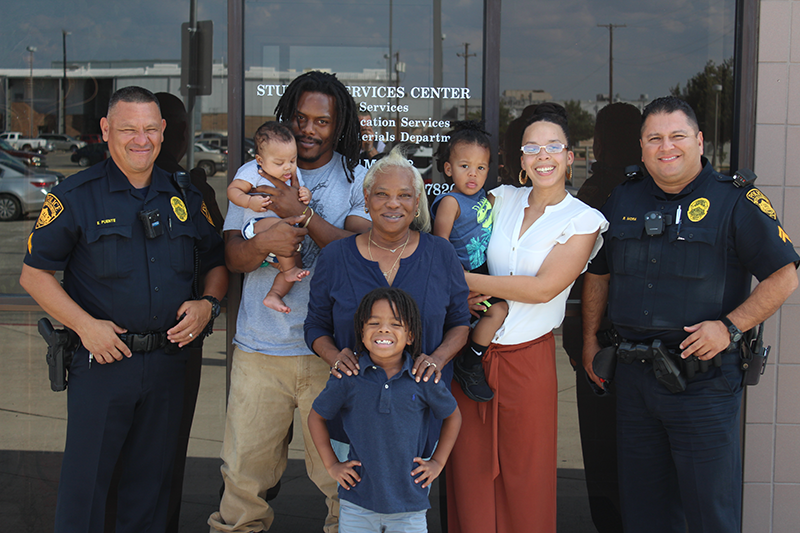