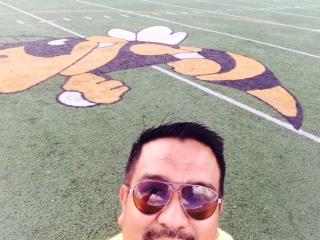 Mr. Esperiqueta began playing trombone in the St. Luke's Catholic School Band.  He continued onto the Mighty Button Band at Central Catholic High School under the direction of Mr. Arnoldo Garza.  After high school graduation, Thomas attended Boston College where he received his Bachelor of Arts in Music.  In college, Thomas participated in Marching Band, Concert Band, Pep Band, Jazz Band, Orchestra, and Choir. He had many opportunities to travel around the nation and Europe with these musical organizations.

Mr. Esperiqueta went onboard with the San Antonio Independent School District in the Fall of 2004 as Band Director at Page Middle School where he spent 2 years.  He spent 1 year at Rhodes Middle School before moving on to Burbank High School in 2007.  During his tenure at Burbank he has built a Colorguard program, Mariachi program and International Baccalaureate Music class.

On the side he helps other band directors with colorguard choreography, colorguard design, marching band drill and Winterguard design.  He enjoys spending time with family and friends.